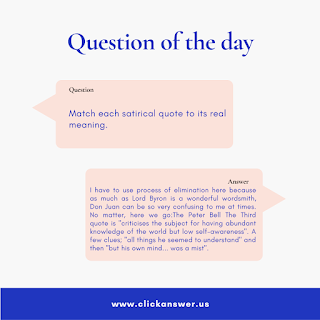 criticizes the subject for having abundant

knowledge of the world but low self-awareness

criticizes the subject for confusing his audience

criticizes the subject for his half baked knowledge

Explaining Metaphysics to the nation--

I wish he would explain his Explanation.

…he really promised something great,

If not intelligible, without Greek

Contrived to talk about the Gods of late,

Much as they might have been supposed to speak.

He was a mighty poet—and

All things he seemed to understand

Of old or new—of sea or land—

But his own mind—which was a mist.

(excerpt from Peter Bell the Third by Percy Shelley)

I have to use process of elimination here because as much as Lord Byron is a wonderful wordsmith, Don Juan can be so very confusing to me at times. No matter, here we go:

The Peter Bell The Third quote is "criticises the subject for having abundant knowledge of the world but low self-awareness". A few clues; "all things he seemed to understand" and then "but his own mind... was a mist".

The first Don Juan quote is "criticises the subject for confusing his audience". This one was harder, but the clues here are: "I wish he would explain his explanation". This seems to suggest the audience is confused.

That leaves the final Don Juan quote in the middle to be "criticises his subject for his half baked knowledge".

Hope that I could help!