What does the phrase "drew him on by artful questions" mean as it is used in sentence two? 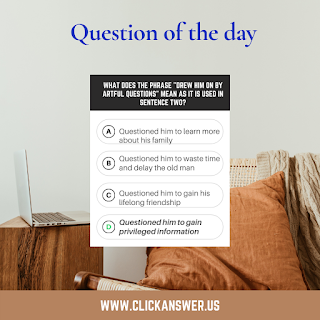 Read this excerpt from Franklin's Autobiography and answer the question that follows.

"1)The old gentleman said he would go with me to the new printer; and when we found him, "Neighbor," says Bradford, "I have brought to see you a young man of your business; perhaps you may want such a one."

2)He ask'd me a few questions, put a composing stick in my hand to see how I work'd, and then said he would employ me soon, though he had just then nothing for me to do; and, taking old Bradford, whom he had never seen before, to be one of the town's people that had a good will for him, enter'd into a conversation on his present undertaking and projects; while Bradford, not discovering that he was the other printer's father, on Keimer's saying he expected soon to get the greatest part of the business into his own hands, drew him on by artful questions, and starting little doubts, to explain all his views, what interests he reli'd on, and in what manner he intended to proceed.

3)I, who stood by and heard all, saw immediately that one of them was a crafty old sophister, and the other a mere novice. 4)Bradford left me with Keimer, who was greatly surpris'd when I told him who the old man was."

What does the phrase "drew him on by artful questions" mean as it is used in sentence two?

- Questioned him to learn more about his family

- Questioned him to waste time and delay the old man

- Questioned him to gain his lifelong friendship

- Questioned him to gain privileged information

- Questioned him to gain privileged information.

Towards the end of the passage, we learn from the speaker that Bradford was a crafty old sophister.

Sophisters or sophists were pre-Socratic philosophers whose domain of expertise were skills that can be compared to modern day advocacy, manipulating arguments so as to convince their interlocutors of anything at anytime.

The primary meaning of the word art is skill, artful here meaning skillful. If Bradford were a sophister, that would mean he knew just what to say or do, in order to get what he wanted. And it is exactly what he did. He managed to go unnoticed and get the information he wanted from Keimer thanks to his artful questions.